Welcome to Reading Youth Orchestra’s Spring Concert, held at St Joseph’s College, Reading, at 6pm on Sunday 3rd April 2022. If you’re looking for the programme notes for the music RYO are playing tonight, you are in the right place!

The below programme notes are provided by Pippa Moore, clarinettist with RYO. 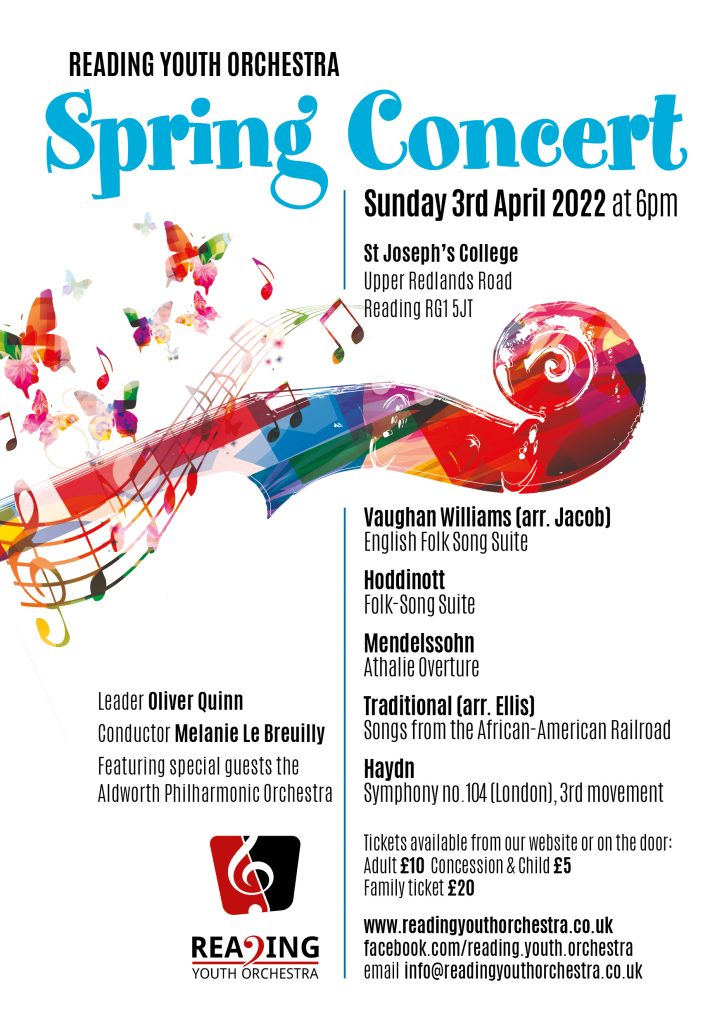 Athalie (or Athalia) was a tragedy play written by Jean Racine (1639-99) in 1691 based on a story from the Bible. In the 1840s, Mendelssohn was asked by King Friedrich Wilhelm IV of Prussia to compose music for the play as he wanted it to be performed in his court. The King did not like Mendelssohn’s first compositions because he used only a piano and a choir of female voices singing in French with words from the choral parts of the play, but the King wanted a performance in German. Mendelssohn then (reluctantly) used a German translation, and expanded it to a full orchestral scoring and with men as well as women in the choir, but it was never performed. A couple of years later, the King asked him to write an overture and other orchestral music (e.g. the war march), without choirs, for the play. These works, including the overture, were first performed in December 1845.

The overture begins with a slow but grand theme played by various woodwind and brass instruments. Listen out for it because this theme comes up lots of times throughout! After the first theme there is a second more lyrical and graceful theme played by the flutes and clarinets – this theme also comes back a lot.

After the calm opening section, the music suddenly gets louder and more dramatic, and almost doubles in speed. The whole orchestra is often playing forte or even fortissimo (very loud!) to reflect the dramatic plot of the play. Overtures are pieces of music that are played before the performance of an opera or play and summarise the story, so within this one piece of music you should be able to get an idea about the plot. Why not try to think of a story that goes along with the music?

3rd movement from Symphony No.104
- by Joseph Haydn

Haydn’s 104th Symphony was the last of a set of 12 Symphonies (known as the “London Symphonies”) commissioned by a virtuosic London violinist called Johann Peter Salomon. The symphony was first performed at Haydn’s London farewell concert in April 1795 (over 200 years ago!) The London audience loved the symphony and Haydn was very pleased with it too, as he wrote in his diary:

“The hall was filled with a picked audience. The whole company was delighted and so was I.”

Tonight we are playing the third movement of the symphony: the Minuet and Trio. Movements like these have lots of repeats and a da capo (meaning you have to go all the way back to the beginning). As hinted by the name, this movement has two sections: the minuet and the trio. A minuet is an old fashioned dance (a bit like a waltz but much posher) and the whole orchestra play this minuet with lots of repeats in it. Then there is a trio where the 1st violins, oboe and bassoon act as solo instruments while other instruments accompany them. This section also has lots of repeats in it. At the end of this section, you go all the way back to the beginning of the minuet and play it again but without the repeats. See if you can listen out for which sections we’re playing.

The reason we chose this piece to play tonight is relating to this year’s 75th anniversary of the relationship between Reading and its twin town Dusseldorf, in Germany. Back in 1949, RYO had only been established for four years and travelled to Dusseldorf – it was reportedly the first orchestra to visit Germany after the Second World War. Both English and German students put on a concert in the town, with RYO playing the last movement of this ‘London’ symphony by Haydn.

The concert was a huge success, not just because of the music. The young people involved and their families, both in Reading and in Dusseldorf, would have been impacted hugely by the war. For them to come together side by side and build this bridge via music, showed such courage, respect and unity, just as relevant now as it was then.

Unlike the previous two pieces which were written long before the days of television, this suite was actually written specifically for television. Hoddinott, born in Wales in 1929, chose to use some Welsh folk tunes and arrange them for only a small collection of instruments to complement the TV series. However, he later decided to expand the music into a whole suite, completed in 1962.

I. Croen Y Ddafad Felen (The Yellow Sheepskin)
A folk song for a dancing to. Hoddinott gives most of the tune to the flutes and trumpets which creates variety as the flute version of the tune is much more floaty and delicate and the trumpet version is more confident and outgoing.

II. Hw ‘Mlaen (Ox-Driving Song)
The oboe carries the recurring melody throughout this movement, while other wind instruments chip in to add colour to the melody. The violins, by contrast, play the melody more smoothly and with less of the oboe’s cheeky bounce.
III. Cân Serch (Love Song)
Hoddinott manages to make this movement romantic and emotive, but also just a bit sad. There’s a lot of bittersweet conversation between the different instruments, notably the horn, clarinet, and solo viola and violin passages. The horn’s falling responses give the impression of longing for love but never quite being able to reach it.
IV. Modryb Neli (Aunt Nellie)
Another lively country dance where the melody is led by the flute and piccolo. One of the most interesting things about this movement is the irregular rhythms, which is able to confuse both the musicians counting rests and the audience listening!

If you’re interested in how to pronounce these Welsh titles, you can listen to the lovely Jo reading them out here (please don’t do this in the middle of the concert!)

Songs from the African-American Railroad
- Traditional, arranged by Jennifer Ellis

When we started the school year in September, we had just reunited after being online during the Covid lockdowns and wanted to play music that celebrated the community coming back together. Alongside the folk-inspired pieces, we asked clarinettist Jennifer if she would like to arrange a piece based on material from another part of Reading’s rich culture. She chose to write a medley of three songs inspired by the African-American Railroad: Go Down Moses, Now Let Me Fly and Yankee Doodle.

If you would like to read more about these three songs and her reasons for choosing them, check out her recent blog post.

This folk song suite was composed after Vaughan Williams was asked to compose some music for a military band. Originally, there were four movements, but in 1924 ‘Folk Song Suite’ and ‘Sea Songs’ were published for military band separately. Vaughan Williams asked Gordon Jacob to arrange the three movements for orchestra, which were also published in 1924. Each movement is made up of several folk songs. Below you can find out a bit about the folk songs (you can read our other blog posts if you want to learn more!) and what they sound when played by the orchestra.

“I’m Seventeen Come Sunday” – This was a very popular folk song all across England and Ireland about a young man courting a girl who is soon to be seventeen, and is the very first folk song in the suite. It is played multiple times, first as a quiet flute solo, then as a more triumphant full orchestra sound, and both of these sections are repeated because of the da capo (meaning go back to the beginning) at the end of the movement.

“Pretty Caroline” – Also known to be titled “One Morning in the Month of May”, this song is about a man who returns home after years away and his sweetheart recognises him by the gifts she gave him before he left. Vaughan Williams writes this as a lyrical clarinet solo, doubled by the flute, that can be heard twice in the movement.

“Dives and Lazarus” – No one knows what the real words that belong to this tune are, but lyrics which describe a Bible story and fit well with the melody are often thought to be at least somewhat related to it. Here, the orchestra is divided into three ‘teams’: the tune in the lower instruments, the countermelody (another tune that happens at the same time as the main one) in the upper woodwind, and the accompaniment in the brass. Listen out for the different ‘teams’ and how their parts fit together.

II. Intermezzo – “My Bonny Boy”
“My Bonnie, Bonnie Boy” – This sad song, which the movement is named after because it comes at both the beginning and end, tells the story of a girl who loses her bonnie boy to another girl. It’s a big oboe solo with little accompaniment, meaning the oboist has a lot of expressive freedom with which to tell the sad love story.
“Green Bushes” – Even before it was used in an 1845 play, this song was very widely known. There are many different lyrics to the song, but most tell the story of a man who finds a young girl waiting for her lover. This song is much more lively than the previous song, and the melody is played twice in the woodwinds, first at a higher then lower pitch while the rest of the orchestra mainly play accompanying chords.
III. March – “Folk Songs from Somerset”
“Blow Away the Morning Dew” – This was originally a longer folk song called “The Baffled Night”, of which versions can be found all across Europe, but the story the lyrics tell depends entirely on who is singing it though. This song bookends the first section of the last movement. It begins with a clarinet solo and gradually adds more and more instruments until the whole orchestra is playing and it’s very loud!
“High Germany” – Vaughan Williams collected this song in 1904 (before either of the world wars) and so no one is sure which war the character Harry is leaving for Germany to fight while trying to persuade his love, Polly, to come with him. The song has been very cleverly slotted into the middle of “Blow Away the Morning Dew”. Here, the melody is mostly in the brass, instead of the woodwind like before. Can you guess where the song starts by listening to what instruments have the tune?
“Whistle, Daughter, Whistle” – This song, which traditionally includes actual whistling, tells the story of a young girl who wants to get married, but her mother is not happy about it. In this suite, the time signature changes and creates a very different mood, as does the melody being on a clarinet and piccolo with pizzicato (plucking instead of bowing) strings accompanying. Make sure to listen out for the lovely trumpet countermelody too!
“John Barleycorn” – There are two origins of this song, but likely the more popular was the slightly strange farmer’s song. It is probably the grandest of all of the English folk songs in the suite and sounds a bit like a royal fanfare. The melody is in all the lower instruments (trombones, lower strings and bassoon) while the rest of the orchestra plays fanfares (we like to all pretend to be trumpets!!)

Programme notes on APO’s pieces will be given verbally at the concert.

Are you are a young musician who fancies being part of our next concert? If so, we currently have vacancies. Please check out our Join Us page or contact us to arrange an informal audition. 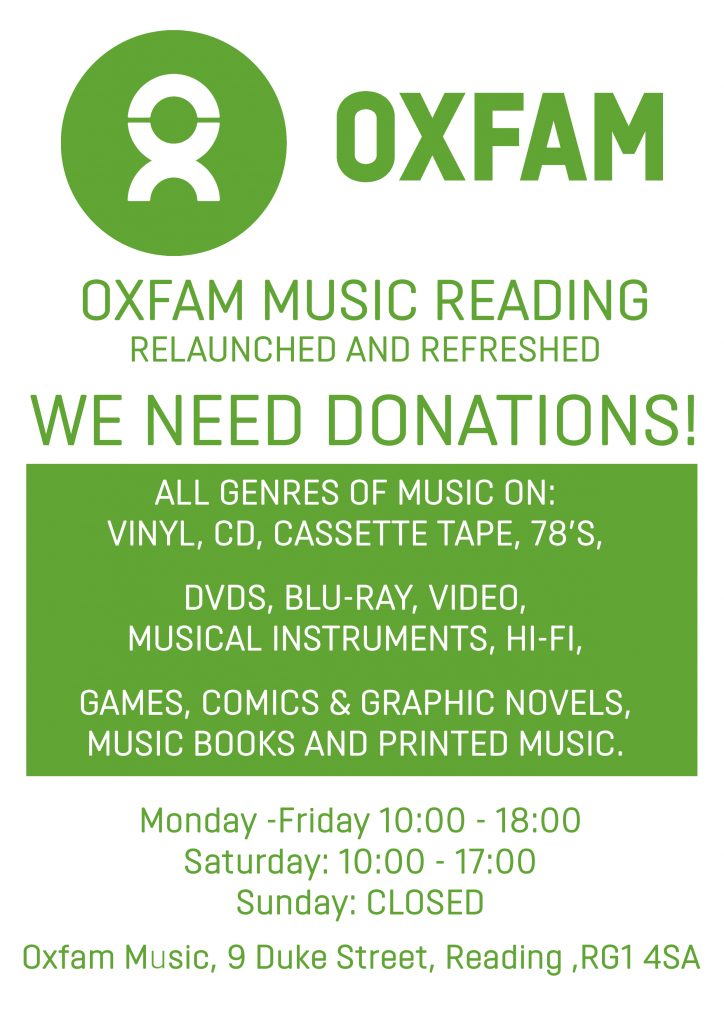